The complete behaviour of Bondy is defined by the combination of 3 types of "configuration" data:

The following diagram shows the scopes and mechanism for managing each configuration type: 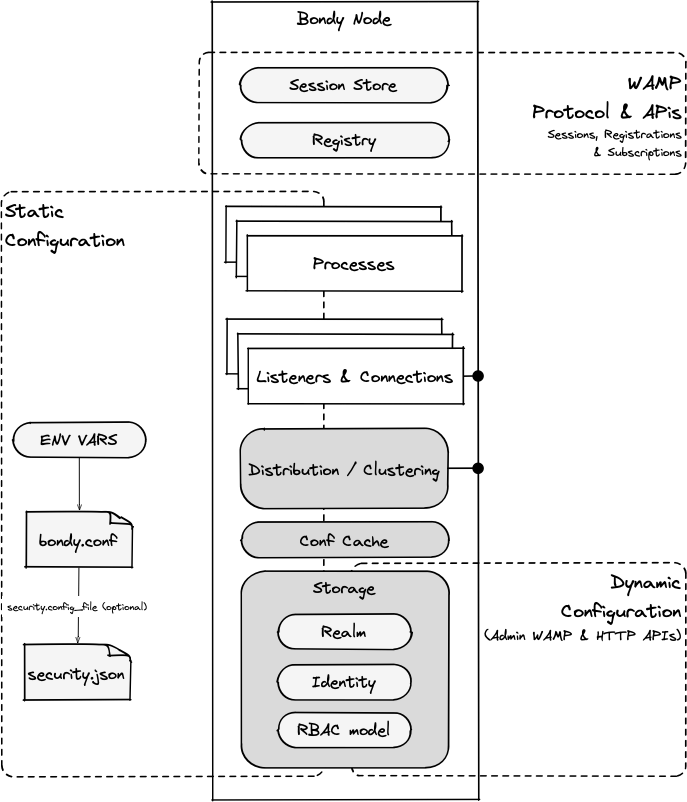 To learn more about Multi-tenancy security configuration check the WAMP and HTTP references.

As opposed to other application networking options i.e. Service Mesh, in which services are configured using a proprietary API e.g. Istio APIs and YAML for Kubernetes resources, Bondy RPC and Pub/Sub configuration is entirely managed by WAMP.

Bondy will use the following environment variables to configure the node identity and the paths it uses to store data.

In previous version of Bondy these options where configured using the bondy.conf file but that introduced certain issues with the configuration system.

During node startup, Bondy will check the existance of the file, parse it and validate its contents. In case of a syntax or validation error, Bondy will stop printing the reason to standard output.

If a configuration file is not found at the expected location, Bondy will create one using default values.

When deploying a Bondy cluster it is vital that the same bondy.conf file is used with all nodes.

The default file location depends on the installation method you've used as shown in the following table.

The location can be overriden using the BONDY_ETC_DIR environment variable.

The file uses a sysctl-like syntax that looks like this:

Note that blank lines are ignored, and whitespace before and after a key or value is ignored, although a value can contain whitespace within. Lines which begin with a # are considered comments and ignored.

The documentation for each key defines the acceptable datatype and format for each value and the default value (if any).

The following are the set of acceptable datatypes used in the documentation.

How options and their defaults are documented

Take the following snippet of the Node section as an example.

It defines the token nodename which takes a string value and defaults to bondy@127.0.0.1. Notice the documentation will further specify which strings are acceptable.

Start a Bondy node without providing a configuration file and inspect the one generated by Bondy once the node has started. Bondy would have created the file using the default values. You can copy this file and use it as template to make your modifications.

When you are done copy your modified file to the expected location and start Bondy again.

Within the bondy.conf file you can use the following variables which Bondy will substitute before running.

The following is an example of how to use variable substitution.

If you want to use environment variables in the bondy.conf you have to rename the file to bondy.conf.template.

During startup, Bondy considers all files with suffix .template for OS variable sustitution and if successful results in a new file of the same name stripped of the .template suffix and where all environment variables have been replaced.

The syntax for environment variables is ${VAR_NAME}.

Notice the BONDY_* variables mentioned above will always be used by Bondy.

Bondy can accumulate a large number of open file handles during operation. The creation of numerous data files is normal, and the storage backend performs periodic merges of data file collections to avoid accumulating file handles.

To accommodate this you should increase the open files limit on your system.

Most operating systems can check and change the open-files limit for the current shell session using the ulimit command.

Start by checking the current open file limit values with:

Set the limit by using:

The above configuration persists only for the duration of your shell session. To make the change permanent read the following section.

To change the limit on a system-wide, permanent basis read the following sections.

On most Linux distributions, the total limit for open files is controlled by sysctl.

If you installed Bondy from a binary package, you will need to the add the following settings to the /etc/security/limits.conf file for the bondy user:

You can enable PAM-based user limits so that non-root users, such as the bondy user, may specify a higher value for maximum open files.

Save and close the file. If /etc/pam.d/common-session-noninteractive exists, append the same line as above.

Then, edit /etc/security/limits.conf and append the following lines to the file:

Save and close the file.

(Optional) If you will be accessing the Bondy nodes via secure shell (SSH), you should also edit /etc/ssh/sshd_config and set the following line:

Restart the machine so the limits take effect and verify that the new limits are set with the following command:

Docker ulimits limit a program's resource utilization to prevent a run-away bug or security breach from bringing the whole system down.

The instructions below describe how to check what your current value is, and then increase it to allow Bondy to run.

To increase the ulimit value:

and replace the line: