Skip to content
Return to top
On this page
DRAFT

A distributed system is one in which the failure of a computer you didn't even know existed can render your own computer unusable.

A distributed system is a group of computers working together to achieve a unified goal.

Distributed systems that use replication as a strategy for high availability and fault-tolerance generally store multiple copies of the data, usually over a cluster of nodes, and so they need to define the semantics of concurrent accesses to this data.

Consistency can be simply defined by how the copies from the same data may vary (or contradict) within the same replicated distributed system. When the readings on a given data object are inconsistent with the last update on this data object, this is a consistency anomaly.

A Consistency Model specifies a contract between programmer and a distributed system, wherein the system guarantees that if the programmer follows the rules, data will be consistent i.e. not contradictory, and the results of reading, writing, or updating data will be predictable.

Every consistency model and thus every distributed system will show different properties depending on their architecture design and in particular on the trade-offs made in order to achieve the system’s quality attributes (non-functional requirements).

All distributed systems properties can be expressed as the intersection of safety and liveness properties[1].

Unlike liveness properties, if a safety property is violated there is always a finite execution that shows the violation.

The thing to observe about a liveness property is that no partial execution is irremediable: it always remains possible for the required 'good thing' to occur in the future.

In distributed systems, there are—broadly speaking—two approaches to data consistency: consensus or convergence.

Eventual consistency is an example of a liveness property.

The CAP Theorem is a fundamental theorem in distributed systems that states that distributed systems requiring always-on, highly available operation cannot guarantee the illusion of coherent, consistent single-system operation in the presence of network partitions, which cut communication between active servers.

According to CAP any networked shared-data system can have at most two of three desirable properties:

The easiest way to understand CAP is to think of two nodes on opposite sides of a partition. Allowing at least one node to update state will cause the nodes to become inconsistent, thus forfeiting (C). Likewise, if the choice is to preserve consistency, one side of the partition must act as if it is unavailable, thus forfeiting (A). Only when nodes communicate is it possible to preserve both consistency and availability, thereby forfeiting (P). — Eric Brewer, VP Infrastructure Google

The CAP theorem, formulated by Eric Brewer and proven by Lynch and Gilbert, dictates that it is impossible simultaneously to achieve always-on experience (availability) and to ensure that users read the latest written version of a distributed database (consistency—as formally proven, a property known as “linearizability”) in the presence of partial failure (partitions).

If two processes (or groups of processes) within a distributed system cannot communicate (P)—either because of a network failure or the failure of one of the components—then updates cannot be synchronously propagated to all processes without blocking. Under partitions, such system system cannot safely complete updates (C) and hence is unavailable to some or all of its users (A).

Data inconsistency in large-scale reliable distributed systems must be tolerated for two reasons: improving read and write performance under highly concurrent conditions; and handling partition cases where a majority model would render part of the system unavailable even though the nodes are up and running.

Eventual consistency is a consistency model used in distributed computing to achieve high availability that informally guarantees that, if no new updates are made to a given data item, eventually all accesses to that item will return the last updated value.

Eventual consistency, also called optimistic replication, is widely deployed in distributed systems, and has origins in early mobile computing projects. A system that has achieved eventual consistency is often said to have converged, or achieved replica convergence.

Eventual consistency is purely a liveness guarantee i.e. it makes not safety guarantees. Informally, it guarantees that, if no additional updates are made to a given data item, all reads to that item will eventually return the same value.

Stock PostgreSQL and MySQL master-slave databases replication is done asynchronously. This means that the only way to ensure read-your-writes consistency is to perform the query on the master. Reading from a randomly selected slave results in the possibility of not finding the result (eventual consistency).

Synchronous master-to-master replication for PostgreSQL and MySQL can be obtained from companies like Percona, Galera and AWS. However, no solution is perfect or without costs and architecture trade-offs.

For example, the new Aurora multi-master offering can present lags:

By default, the data seen by a read operation in a multi-master cluster is subject to replication lag, typically a few milliseconds.

If two DB instances attempt to modify the same data page at almost the same instant, a write conflict occurs. The earliest change request is approved using a quorum voting mechanism. That change is saved to permanent storage. The DB instance whose change isn't approved rolls back the entire transaction containing the attempted change. Rolling back the transaction ensures that data is kept in a consistent state, and applications always see a predictable view of the data. Your application can detect the deadlock condition and retry the entire transaction.

With an active-active workload, you perform read and write operations to all the DB instances at the same time. In this configuration, you typically segment the workload so that the different DB instances don't modify the same underlying data at the same time. Doing so minimizes the chance for write conflicts. Multi-master clusters work well with application logic that's designed for a segmented workload. In this type of workload, you divide write operations by database instance, database, table, or table partition.

If you expect failure to happen on an external service, do not make its presence a guarantee of your system. — Fred Hebert, It's About the Guarantees[1:1]

The following are the key characteristics of Bondy.

Bondy default mode of operation is to work as a cluster consisting of multiple nodes. When it comes to certain data such as Registry (aka process registry, routing table), Realms, RBAC entities and configuration, Bondy nodes are clones of one another. However, each node has its own set of clients and/or Bridge Relay nodes connected. The key capability of Bondy as an application router is to be able to forward messages between those connected clients transparently across the cluster.

Bondy nodes periodically exchange messages with each other to maintain their view of the cluster membership. This is done by means of a “gossip protocol”. Node joins and leaves are announced, i.e. “gossiped” to other nodes so that the other nodes can update their local views appropriately. Nodes also periodically re-announce what their view in case any nodes happened to miss previous updates.

Depending on the chosen membership strategy (full-mesh or p2p) nodes will have a full or partial view of the cluster members (respectively). The view is stored by each node using a Conflict-free Replicated Data Type (CRDT) which achieves convergence without the need for coordination.

The algorithm used to build and maintain the broadcast tree is Epidemic Broadcast Trees (a.k.a Plumtree).

Data in Bondy is stored using a combination of the following storage mechanisms:

As previously mentioned most data in Bondy is replicated to all nodes in the cluster. This is done in (soft) real-time leveraging the same Gossip infrastructure used by the cluster membership service.

Whenever an object is created, updated or deleted on a node, a message containing the operation is broadcasted to all other nodes.

In a distributed, eventually consistent system like Bondy, conflicts between object replicas stored on different nodes are an expected byproduct of node failure, concurrent client updates, physical data loss and corruption, and other events. These conflicts occur when objects are either missing, as when one node holds a replica of the object and another node does not, or divergent, as when the values of an existing object differ across nodes.

When an object is read Bondy checks if there are any conflicts and uses a suitable conflict resolution strategy for the case. The result is then written to the database and broadcasted to all other nodes.

Periodically each Bondy node will choose a random peer and perform an exchange comparing their databases and exchanging any missing and/or repairing conflicting data. This is done efficiently by using Merkle trees (a.k.a hashtrees) that are stored on LevelDB. 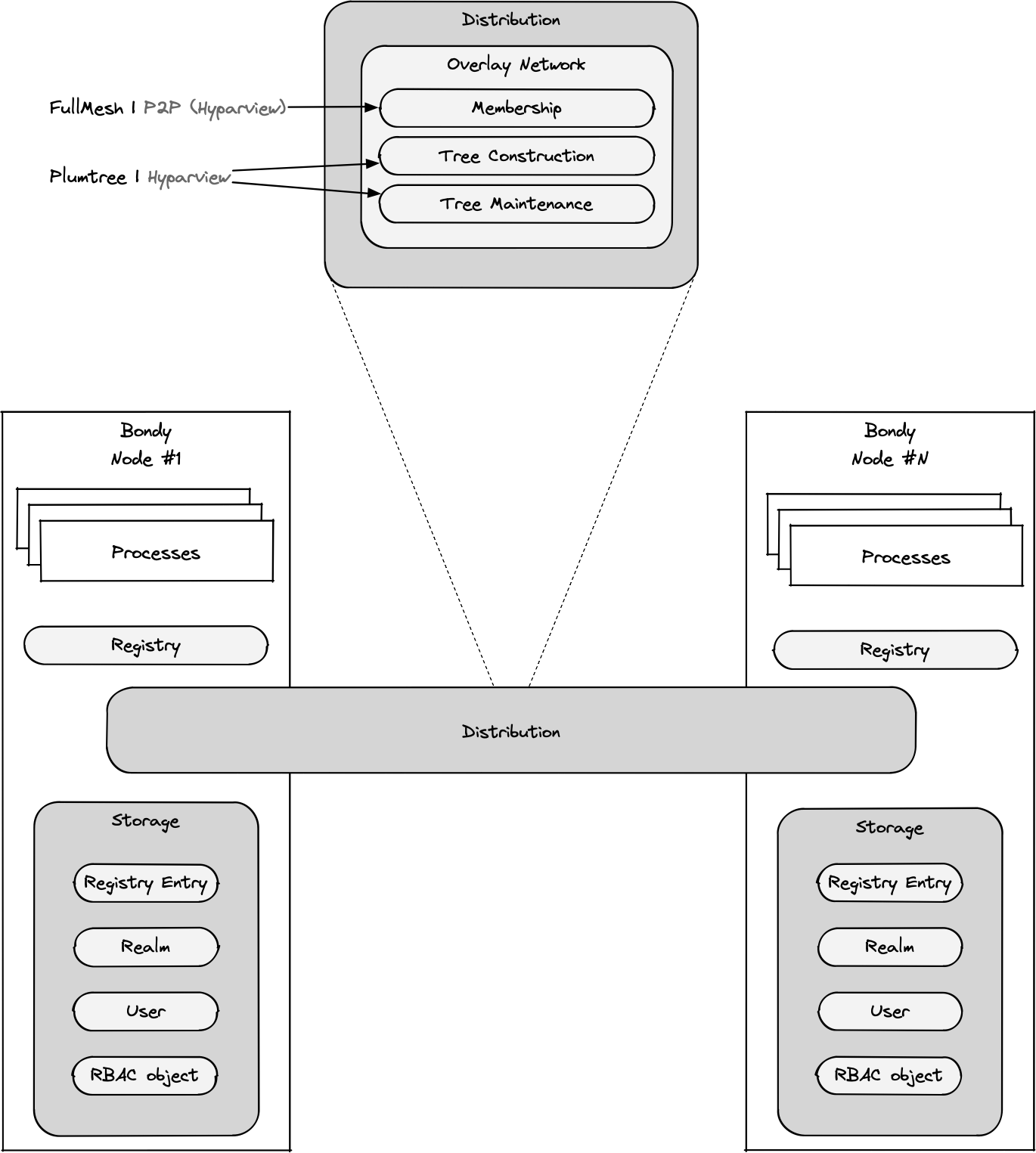